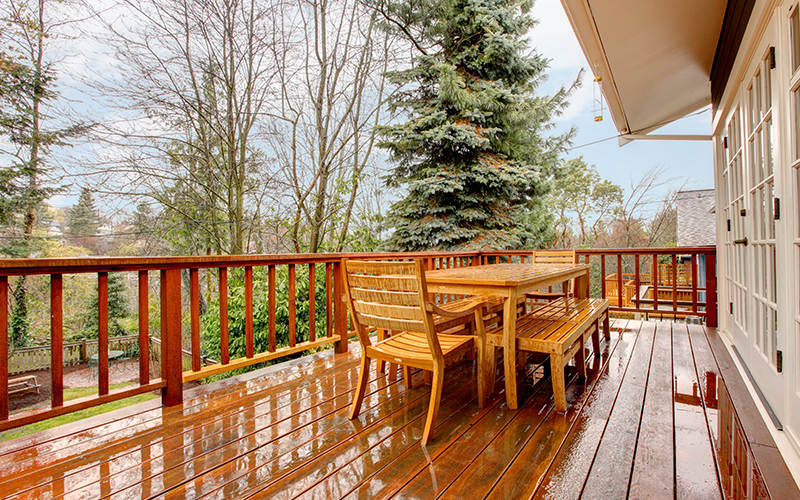 We are custom deck designers, and our clients often ask us how “that composite decking” compares to wood. Wood has been the standard for decks since…, well, since the first deck was built. It’s moderately hard, it’s durable, and it’s attractive.

Until it fades. Then wood looks old and tired.

You can treat it with a preservative to add color and to block out the harsh sun for a while, but the sun is strong and, it is relentless. It will bleach your deck grey.  You must re-treat your deck every year to restore its color and to extend its life.  Re-treating a deck is work — at least a day of work for a mid-sized wood deck, and more for larger decks.  For a full explanation of what re-treating a Pressure Treated wood deck entails.

Well, most people do not want to burn up their leisure time treating a deck.  How about a low maintenance material for a deck? How about plastic?  You know plastic: it is that unbreakable replacement for dinner plates, it is a light-weight replacement for car bumpers, it is a cheap replacement for silverware on picnics.  Plastic will not rot, it can be fairly strong, and — here’s the big advantage for your deck — it does not need yearly maintenance. Sounds good, but how does it look on a deck?  Truthfully: not great. When first introduced, it looked like…plastic, fake plastic. A poor imitation of genuine wood.  Initially, the tradeoff between wood and artificial decking was Good Appearance vs. Low Maintenance — or, to be blunt, Genuine vs. Fake. 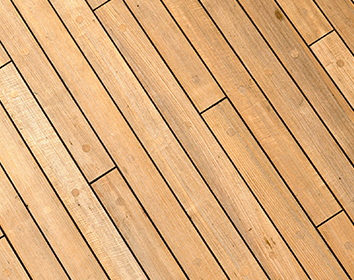 Let’s review how synthetic decking progressed from ugly to attractive.

In 1992, Trex® introduced the first low maintenance decking. (Actually, Trex touted it as “No Maintenance.”  That was a costly mistake.¹) It was composed of plastic and wood fibers, and thus was called “composite.”  Its surface was smooth and uniform; and it looked manufactured – because it was manufactured.

Let’s call this the First Generation.

Other companies, like Choicedek®, introduced competitive “low maintenance” decking.  All these early composites faded significantly and were vulnerable to mold (like wood) – but they would not rot or splinter and did not require yearly staining.  They were heavier and more dense than wood, and thus warmer under bare feet.  Drop a steak on composite decking or spill red wine on it, and you’d see the stains for months.  But that was not a competitive disadvantage, because wood too was vulnerable to food stains. Wood’s maintenance issue remained.  Treating a wood deck can easily consume a full day every year, and Americans are increasingly jealous with their time, so composite decking slowly gained favor in the marketplace.

Manufacturers improved their decking by adding grain and texture to composites, expanding color options, and developing ways to reduce fading. Low maintenance decking looked better, but still no one would mistake it for real wood.

This was the Second Generation.

Other improvements followed. FastenMaster® designed a screw that eliminated the ugly mushroom bump around normal deck screws. Companies like Correct Deck (now DuraLife®) and TimberTech® created grooved decking with hidden fasteners for a cleaner appearance. But composite decking was still composed of plastic and wood fibers – and those exposed wood fibers provided food for mold, especially when wet.

Along came Procell.  It abandoned the wood fibers in favor of all PVC plastic (with some flax fibers embedded for strength). Procell, now called Azek®, arrived initially in only grey and light brown, but soon new pastel colors were offered.  To many people, it looks like well-painted wood.

Beyond appearance, Azek’s best features are stain resistance, scratch resistance, and mold resistance. Food stains wash off easily; Azek even advertised photos of red wine spilled on its decking.  Without wood fibers as a food source, this new decking fared much better against those blackish mold stains.  Because Azek’s PVC is a weaker plastic than the polyurethane and polypropylene used by competitors, it does not offer the grooves on the edges for hidden clips.  The only way to fasten Azek was with screws through the surface — until Fasten Master introduced Cortex® plugs that neatly cover each screw head.  The plugs are cut from original Azek, so if you carefully align the grain, the plugs disappear.

Progress continued. Companies like TimberTech® and Fiberon® (and later, Trex) introduced random dark streaks to mimic the varying colors of real wood. This is the Third Generation of synthetic decking, and it looks more like real wood.

All these improvements kept increasing the price of low maintenance decking. In early 2009 several manufacturers combined new and old by putting an attractive, hard PVC plastic cap over a less expensive composite core.  Called “cap stock”, this innovation offers the benefits of plastic decking at a lower cost.  And cap stock is actually cooler underfoot that all-plastic decking , maybe because the composite core contains wood.

How Do I Stain My Wooden Porch Or Deck?

How to choose the right type of wood for your projects

Glue Down Hardwood Floors on Concrete